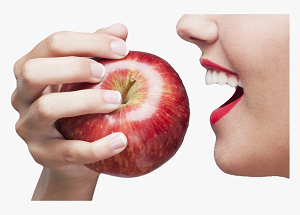 Mistress Vanessa bit into the soft flesh of the shiny red apple and began to chew the treat.  Then she noticed the brown tinge of the apple beneath the outer skin.  “You’ve brought me a bad apple”!

I should explain; I have been visiting the beautiful Mistress Vanessa for many years.  Despite hundreds of sessions I am amazed to say that no two have ever been the same.  Mistress’ ability and ingenuity, combined with a vast array of equipment, ensure a different experience each time!  Even when I request we return to a previous, enjoyable scene activity, it invariably takes a unique path once Mistress Vanessa’s imagination takes over.

One activity that does feature in most of our sessions is some form of food play.  Each visit, Mistress requires me to bring a small selection of foodstuff, (fruit, yogurt, chocolate Etc..).  Mistress Vanessa delights in feeding me the (often spoilt) food in all manner of humiliating ways.  That brings me back to the apple…………

“You’ve brought me a bad apple”!  Mistress Vanessa surveyed the brown flesh of the apple with anger and dismay.  I looked at the decaying fruit with dread, my heart sank!  Mistress already had a mouthful of the rotting fruit in her delicate mouth.  Quickly, she ordered me to “open wide” and spat the part chewed mess into my own mouth.  I thanked her for the “treat” but knew there would be repercussions.  “You will have to be punished for that”!

The punishment Mistress selected was something I have never previously suffered, bare hand cock slapping.  Mistress secured me in a standing position.  She stood before me and announced that I would receive six hard slaps from her bare hand.  “Surely that can’t be too bad”? I thought.  WRONG!  The first slap brought an anguished groan from my lips.  Mistress Vanessa smiled in a knowing but cruel way.  The pain wasn’t immediate, rather it appeared a second or so later and manifested itself as a dull, bruise like ache.

“they’re only going to get harder”, mistress declared.  The second, harder slap was worse!  Was it the pain or the knowledge and dread of what to expect?

By the fifth slap Mistress’s demeanour was softening.  She was clearly enjoying this but still in no mood to show compassion. 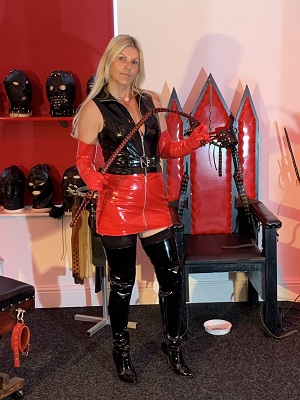 My own body betrayed me.  Despite the pain, my cock stood even more erect.  “Ooooo look at the nice big target you’re offering me” Mistress cooed.  “If only you had some self-control this wouldn’t hurt half as much”!  This, of course is impossible.  Mistress often instructs me to “show some self-control” and ridicules the fact that my cock stands erect despite her painful administrations.  With Mistress Vanessa standing before me dressed in shiny PVC and purring suggestively into me ear, self-control?  No chance!

Mistress administered the sixth and hardest slap.  I yelped and strained at the chains securing me.  My eyes watered but was that a giggle that escaped Mistress Vanessa’s lips?

The punishment now over, I was released and ordered to worship my Mistress’s beautiful boots whilst Mistress prepared the remaining apple for my consumption.  Mistress has many imaginative, humiliating ways of feeding her slaves.  Part chewed, crushed under her boots, laced with pepper, chilli or other unwelcome ingredients.  I could write an entire blog on this alone (and probably will) if Mistress demands.

Without a doubt, Mistress Vanessa is a beautiful, skilled and sensitive mistress.  A session with her is unforgettable and, though often painful, lures you back again and again.